Some people enjoy working on bikes more than they enjoy riding them. I am not one of those people. I hate taking time out of my life to maintain my vehicles. Which is yet another reason I’m so gung-ho about electric vehicles. However, when I lived in NYC, I took an awesome motorcycle maintenance class my friends recommended. Only because it’s so hard to find a decent mechanic in NYC, particularly with reasonable rates, that you may as well do it all yourself. I was lucky because the teacher was really cool, the exact opposite of the ogre who taught auto shop in high school and forced me to study carburetors. On my own, because of some heinous and forgotten crime I’d committed as a student. And every time I’d return to him, convinced I knew every thing there was to know about those infernal devices, he’d ask me the one question I couldn’t answer. To this day, I despise carburetors.

Armen, on the other hand, was delightfully entertaining and made it fun to work on bikes. Which is good, since I managed to strip a cylinder stud in his class. He suggested I go ahead and rebuild the motor on the 1975 BMW R60/6, and we did it together. It was so much fun I didn’t think twice about taking apart my brand new Ducati Monster so I could get the frame powdercoated a better color. It only took us 4 hours to disassemble the Monster, and 4 months to put her back together. In the meantime, Armen almost died of internal hemorrhaging (unrelated, I’m sure), and I missed out on a chance to get to know Lenny Kravitz’ cousin after we’d been checking each other out across a fashion show all evening. I had to run off to Jersey and work on my bike. Insane. I never did see him again, but that event was a major turning point in my life.

When I moved to LA, then to NC, it was much easier to find affordable, trustworthy mechanics, so I used them. I haven’t changed my own oil in about a decade. Well, I decided to save some money by doing my own oil change for a change, and damn if it’s not 10 times easier than adjusting the chain. Why does chain alignment have to be so difficult and so frequent? I hate it. I’d rather go through more chains than adjust them every 5 mintes.

Bicycles Are Just Stripped Down Motorcycles

Yet I just spent hours tweaking over the spokes on my bicycle. I could keep at it all night, except I don’t have a crescent wrench narrow enough to properly set the wheel nuts. So my front wheel is off balance but I have the world’s tightest spokes. Working on bicycles is so much more fun than working on motorcycles. Maybe because it’s something new, but I think it’s also because it’s all so clear. I even have a deeper understanding of gear ratios than I ever did on a motorcycle. Anyway, I figured it was time to replace the 30+ year old tires I’d had on the bike, as the sidewalls were completely cracking off. After I punctured the old innertube with a screwdriver (because I misused & broke the plastic “spoon” they let me use at Bicycle Kitchen) I went to the nearest shop Google Maps could show me, Rolling Cowboys, to pick up an innertube and a proper spoon. The owner was so helpful he even took the time to show me how to use it properly. So now I have fresh rubber! Hopefully the new tires will help absorb some of the vicious bumps out there. That combined with the great bicycle map they give out at Rolling Cowboys should keep me rubber side down.

And here’s the new blue wall tire, as I tweak out on the spokes…the pink tape marks the recurring icky spot. I don’t want to risk over-tightening the spokes, I learned that lesson with the oil drain pan bolts on that old Beemer! 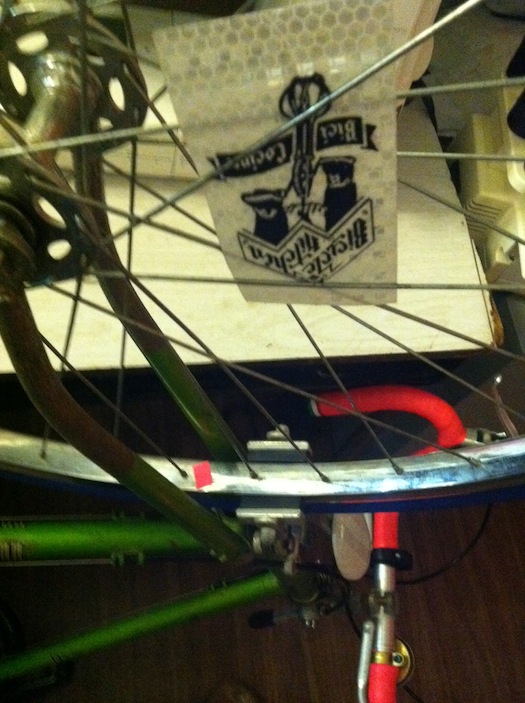